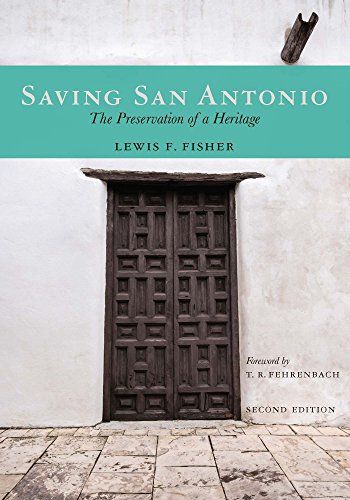 Few American cities enjoy the likes of San Antonio's visual links with its dramatic past. The Alamo and four other Spanish missions, recently marked as a UNESCO World Heritage site, are the most obvious but there are a host of landmarks and folkways that have survived over the course of nearly three centuries that still lend San Antonio an "odd and antiquated foreignness." Adding to the charm of the nation's seventh largest city is the San Antonio River, saved to become a winding linear park through the heart of downtown and beyond and a world model for sensitive urban development. San Antonio's heritage has not been preserved by accident. The wrecking balls and headlong development that accompanied progress in nineteenth-century San Antonio roused an indigenous historic preservation movement—the first west of the Mississippi River to become effective.

Its thrust has increased since the mid-1920s with the pioneering work of the San Antonio Conservation Society. In Saving San Antonio, Texas historian Lewis Fisher peels back the myths surrounding more than a century of preservation triumphs and failures to reveal a lively mosaic that portrays the saving of San Antonio's cultural and architectural soul. The process, entertaining in the telling, has reverberated throughout the United States and provided significant lessons for the built environments and economies of cities everywhere.