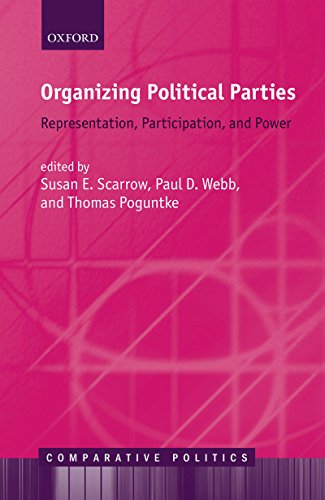 Political party organizations play large roles in democracies, yet their organizations differ widely, and their statutes change much more frequently than constitutions or electoral laws. How do these differences, and these frequent changes, affect the operation of democracy?

This book seeks to answer these questions by presenting a comprehensive overview of the state of party organization in nineteen contemporary democracies. Using a unique new data collection, the book's chapters test propositions about the reasons for variation and similarities across party organizations. They find more evidence of within-country similarity than of cross-national patterns based on party ideology. After exploring parties' organizational differences, the remaining chapters
investigate the impact of these differences. The volume considers a wide range of theories about how party organization may affect political life, including the impact of party rules on the selection of female candidates, the links between party decision processes and the stability of party programmes, the
connection between party finance sources and public trust in political parties, and whether the strength of parties' extra-parliamentary organization affects the behaviour of their elected legislators. Collectively these chapters help to advance comparative studies of elections and representation by inserting party institutions and party agency more firmly into the centre of such studies.

Comparative Politics is a series for researchers, teachers, and students of political science that deals with contemporary government and politics. Global in scope, books in the series are characterised by a stress on comparative analysis and strong methodological rigour. The series is published in association with the European Consortium for Political Research. For more information visit: www.ecprnet.eu.